Time to play some catching up now that it has been a couple weeks since my last tournament.  This recent one was the final regular season tourney on July 29th at near ...same lake where I placed 2nd on a few months ago.

I started out throwing a black/silver zara spook along a rock wall near the shore, but couldn't find any bites for a good half hour.  I switched to a 5XD crankbait, the same one that I caught my keepers on last time around...and not even a nibble.  The crankbait bite was pretty much dead the entire day for most people so I definitely had to switch things up and fish a little differently than I expected to.

Our next spot was the bridge and we fished the points next to the open lanes and bridge pilings for regular boat traffic.  My boater got a bunch of nice hybrid bass...but not the largemouth we were after.  I threw on a 1/8 oz shakey head with a watermelon red flake zoom finesse worm and caught a couple small largemouth...but nothing over the 16" minimum that we needed to keep.   Shortly after my boater had a bad birds nest and after spending some time picking it out I hear a big "splash"....his pole fell in the water.  Oh crap...this was going to be interesting.  He started pulling up the line (luckily he was fishing with braid so the line was floating) and the line just kept coming.  A few f-bombs and he finally realized that the reel was still in free spool and he had to pull the entire spool of line off before he could pull up his rod.   Long story short, he got the rod back...but the line was toast after getting all knotted and bunched together.

Dysfunctional is what I would like to call the rest of our day since we were both back and forth working the trolling motor, retying, trying to come up with a pattern, losing fish, and ending the day with a few good laughs and wondering how the day went by so quickly?

I have to give ourselves credit though after we finally started putting 2 and 2 together when we saw another guy pop a nice fish on a topwater popper.  We fished a main lake cut and came out to the point at the beginning of the cut.  I threw out my Zara Spook from this morning and started working it past a submerged stump.  A couple nice twitches back and forth and...WHAM fish on!  15 1/4" bass....still not big enough to keep.  It's heart breaking seeing a nice fish having to get thrown back into the water with no keepers in the boat.  After a couple more blowups between my boater and I we focused on top water the rest of the day.

There was a string of about 6 or 7 cuts with main lake points at either side and I would guess that at each point I had at least 1 or 2 good bites.  My problem though, I couldn't get one to hook up to save my life!  They would bull rush the bait, body slam it, and before I could react the lure came floating back up to the top of the water in the middle of the wake....just unbelievable.  2 to 3 of those bass could have easily been over 16" but I just couldn't stick them quick enough....I probably had a good maybe 1 count window and that was about it.  That was the breaks though, and I ended up getting a 0 for the tournament.  I wasn't alone though and only half of the field brought in fish.  The original guy that we saw catching bass on topwater was Mike Pappas who won the tournament with 3 fish at a little over 8 lbs.

To give you an idea what we were doing refer to the picture below... 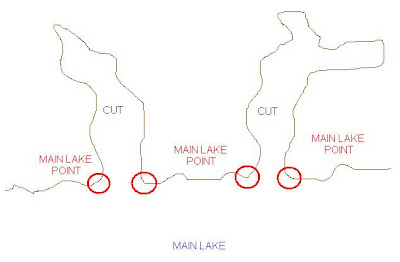 The two lures that we focused on for the most part was the Rebel Pop-R and the Heddon Original Super Spook... 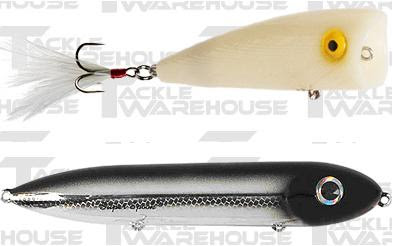 All in all it was a good tournament, kind of disappointing but not because we couldn't find fish.  I am going to need some more practice with the rod and reel setup that I was using with those two topwater lures to get the hookset down better.  Just another learning experience all for the benefit of becoming a better angler in the future.

And that's what I really wanted to drive home with what I have learned so far this year.  It's not so much just using a lure and picking up a technique specific rod and reel....its more so learning what the bite feels like, hooking the fish right, and playing the fish all the way to the boat correctly before you really understand the benefits of the tools you are using.

With that said, good luck on the water...and look for my next entry coming shortly!

Fluke
Posted by Fluke at 11:31 AM
Email ThisBlogThis!Share to TwitterShare to FacebookShare to Pinterest