Well, this one will be short and sweet.  Had my first experience out at the Cal-Sag reservoir and to my surprise I didn't do too bad.  For those of you who haven't been there before, its actually a pretty cool place.  The water is a little sketch to say the least...but it was an interesting place to fish.  Basically all of competitors could fish two areas, the river or Lake Calumet.  The river is predominantly largemouth bass and Lake Calumet was mostly smallmouth.  From the previous tournament there that I didn't compete in...the key seemed to be finding as many largemouth as possible.  Unfortunately there were no limits to be had, and the field was lucky to walk away with what little fish that were caught.  Below is a picture of the lock we had to go through in order to make it between the river and Lake Calumet...first time I have ever done that! 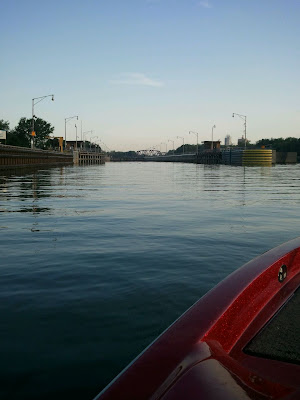 Over the course of the 8 hour tournament I only managed a few bites, but luckily I made all but one of them count.  The first being a small 12" smallmouth I snagged on a crankbait earlier in the morning, and the last was a 2.1 lb largemouth caught on a frog in the last hour of the tournament.  I tried dropshotting quite a bit and flipping a jig...but fish were few and far between.  My first boater got into a huge drum which was fun to watch him battle.  The fish weighed over 10 lbs! 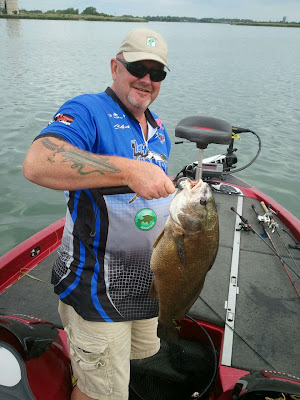 Unfortunately for the third time in a row this year, my boater had boat problems.  I am starting to think that I bring bad luck to my boaters...so if you see me at any ABA's in the future...pray you don't draw me. lol.  So we ended up calling the tournament director and he allowed me to hop on another boat and we found Mike Pena, who I have fished with before, in one of the cuts on Lake Calumet.  I hopped on with him and we fished together the remainder of the day.

I was one of few that weighed in 2 fish and my 3.02 lbs worth of fish was enough to get me 6th place.  They only paid out to 5th place this time, so I was just out of the money this time. That didn't matter though, because I was more concerned about making up lost ground in my club and I ended up in 4th place out of all of our club members.   After getting the overall tournament point totals a few days ago, I am currently in 7th place in our bass club.  Luckily we can drop one bad tournament out of our point totals so if I take that into account I barely squeak by into 6th place.   The top 6 anglers of the club qualify for the 6 man team for the state tournament next year.  So if I can keep this good streak going I might have a chance to make the cut.  I have alot of good anglers though to beat before that happens, but I am really happy that I have shown what I can do so far this year.  Alot of the credit though goes to my boaters and having them help me along the way.  If there's one thing that I can really stress about joining a bass club...you learn a ton in a really short amount of time from others.  That alone has been worth the experience!

Until next time guys, I hope to continue sending you guys good news!  For those that have followed my blog and are still thinking about joining a bass club next year...do it!

Many pond fishermen always find themselves bringing way too much tackle with them when they only wind up using 2-3 baits at the most during an outing.  After the last few months I have tested quite a few lures in my local ponds and want to share with you a set of lures that will all fit into one 3700 Plano box and should consistently get you bit when heading out to your local area of water.  The reason why this set of lures is so effective is because they are not trivial...they are all straight forward, and with a little bit of practice any skill level fisherman can learn how to use them.

Most of the baits mentioned are budget baits and can be purchased locally or online.  All of these baits have worked for me at one point in time or another and I guarantee if you can learn how to use all of these baits you will have a more rewarding time out on the water.

Tight lines and have a safe weekend!

Had another good weekend with the club at Vermilion Lake, the fishing wasn't spectacular but some fish were caught.  The lake was just starting to come out of cold front conditions on Saturday with the air temps in the high 60's and the water temperature on the north end of the lake sitting at around 64 degrees.  Water was stained but I had no issues with that.  A little rain mixed in as well so conditions were not consistent for practice which made it a little harder to get a pattern going.  Seemed like most of the active fish were towards the mouth of the river at the north end and a little ways farther up into the river itself.  A lot of short fish were caught, but no 15" keepers that we were looking for.  Had a nice bonus crappie inhale a Berkley Chigger Craw that was 12"...my boater Scott Sheets had one as well that smoked his spinnerbait.  I was really surprised though that we couldn't get a a decent bite going with all of the shad around...unfortunately that cold front played a big factor.

Sunday morning was nicer with temperatures in the mid to high 70's with blue bird skies.  Water temperatures held about the same from Saturday. Would have probably helped out more if we had some cloud cover, but the high pressure day was all we had to work with.  The water was a little muddier than Saturday from the river, so loud and bright baits were what I was focusing in on.  Had most of my fish come on a Revenge 3/8 oz double willow spinnerbait with a shad color skirt.  The size of the willows and color of the skirt matched the bait fish really well but all of the bass caught were too short.  We went to the mouth of the lake where a lot of lilly pads were and chucked around a frog for a good part of the day, but they were just not cooperating.  A few members had luck with frogs yesterday with Mike Pena hooking up with a 5.5 lb bass, but unfortunately topwater wasn't working for them either.  I finally settled on mixing things up between a spinnerbait and a jig.  We were out by some of the lilly pads at the north end that was mixed in with a lot of lay downs and stumps.  I tied on a 1/2 oz black/blue rattle back jig with a zoom super chunk in saphire blue.  Took about a dozen or so casts until I flipped next to a pretty big stump and got my first decent bite of the day.  I didn't realize I had one on at first until my line started darting away from the stump.  Tried to set the hook as soon as I saw what was happening but it was too late and I missed the fish.  I can almost guarantee it was a keeper with it being able to hold up a 1/2 oz jig  and swim away with it.  Oh well, just had to keep trying.

Without having any more luck we headed up farther into the river.  We worked a lot of shoreline and we finally started getting bit on one stretch.  Scott caught a couple shorts on a brown jig he had so I switched to a similar color.  I had one of my custom California Reservoir living rubber jigs in the "Rusty Craw" color, so I tied that on.  I also put on a Net Bait Paca Chunk in Alabama Craw which had a bright orange and green pumpkin color to it. The water wasn't as stained as the main lake so the color combo was pretty visible in the water.  We worked the shore over pretty well and we both were pitching right into the wood and little islands of grass. I threw the jig right into a little pocket and sure enough the line started taking off again...luckily I reacted quicker this time and set the hook.  Finally had a keeper in the boat!  Caught a few more shorts, but couldn't come up with any more by weigh in time at 2 o'clock

My keeper ended up weighing only 1.72 lbs but was good enough to get me 8th place in the tournament.  The rest of the field pretty much fared the same with one keeper a piece, Chris with 2 keepers, and a few others with no keepers.  Pretty much boiled down to whose keeper had the most weight.  Chris Gaertner stole the show with a massive female that he picked up further down the shoreline that Scott and I were working. He also took 1st place with his two keepers.  We knew he had a good one because we saw him put it in the boat but didn't realize how big it was until we saw it at the weigh in.  The fish tipped the scales at 5.70 lbs which claims big bass bragging rights for the year so far. 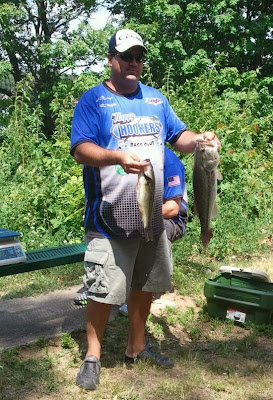 Ryan Boswell ended up in second place with one keeper that also weighed a good amount at 4.5 lbs.  Mike Pena took third then with his 1 keeper along with everyone else down the line.

I can't say that I am frustrated that I only showed up with one keeper because the rest of the field did pretty much the same.  The changing conditions and cold front really put the pressure on all of us.  To think though if I wouldn't have missed that first jig fish I might have been in the top three...but that is the breaks with tournament fishing and I was lucky to have at least the one. We'll get 'em next time!

If any of you get the chance to head down to Vermillion do it!  Pretty neat little lake with a good mix of structure and different types of water to get some good practice in on.

Special thanks to FSA Custom Rods...the flippin stick he built for me helped me catch my only keeper.  Crazy sensitive blank and a really well built rod!  If you want one built just like mine shoot Ed an email at...

Until the next tourney, tight lines! 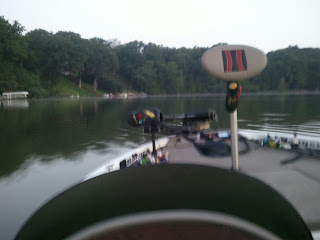