The weather still seems to be sending us small windows of unseasonably warm Fall weather....so what else is there to do besides fishing in a t-shirt and jeans? For this entry I thought more about diving into my thought process on how I broke down the body of water I was fishing. Although as scary of a concept of being inside my head is, it made a lot of sense looking back on the day I had.

The body of water I was fishing today was a pretty decently sized pond with a big dog leg to the left....below you can see what I am talking about. The deepest part of the lake was probably in the 6-8 foot range with some shallower parts in the 1-3 foot range near the shoreline. The water clarity was in the 2-3 feet range with the deeper water slightly cloudy. The weather shot temperatures into the high 50's to low 60's....which helped to warm the air up enough to change the barometric pressure. The water if I had to guess was in the low 40's to high 30's considering there was ice a few days prior on some of the shore edges. The wind was blowing steadily out of the South West around 5-7 mph.

What lures should I have tied on?

A lot of this is decided before I even leave the car. This is where some experience comes into play with having prior knowledge of the lake. But in the case of it being your first time there are some key lures that I have done well on in the Fall the past few seasons.

If you notice...90% of the lures mentioned key in on a shad bite. If there isn't much shad present in the lake you are fishing then I would start adapting to another food source like bluegill, worms, or craws. You will also notice that most of the lures focus on a reaction bite. When trying to fish a new lake I usually like to cover as much water as possible to find out where they are hiding....if there is even fish there to begin with. Once you find them then it is a matter of time to figure out what they are keying in on. Best thing to do is either stick with a similar lure that you caught them initially on or slow it down with a plastic or another slow moving bait.

Now what do I do when I get to the lake?

Best thing to do is pick a spot that has some form of cover....if the spot looks fishy to you then there may be a good chance that fish are hiding somewhere. Again, I have prior lake knowledge so I chose a spot that has produced for me the last two outings. I fished for an hour at that particular spot....threw several lures that produced for me in the last few weeks....and drew a big ol' blank. What changed? Was I doing something wrong? Are the fish even here? Should I just head home?

Ice was on the lake two days ago....and the ice was probably more prevalent on the side of the lake that received the least amount of sunlight. Which ended up being the side I was fishing....so guess what? The water was probably colder on the side I was fishing! Then it hit me....what direction was the wind blowing? The weeks prior the wind was blowing directly at me in that spot and the fish were stacked up there. Today the wind was blowing in a different direction and the fish were no longer there. Wind blown shoreline = warmer water = baitfish! I packed up my stuff and headed to the next spot on the lake...a wind blown point. For some reason bass love points...and with this being the only point on the entire lake I figured one of them was sitting somewhere near by. I tried all of my reaction baits with no luck, so I slowed it down with the craw to give the area a different presentation. About 30 minutes into the new spot, I finally felt the "thunk" of fish picking up the Paca Craw. 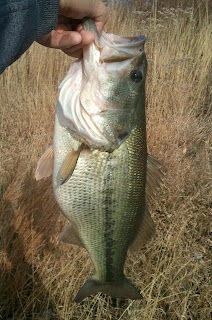 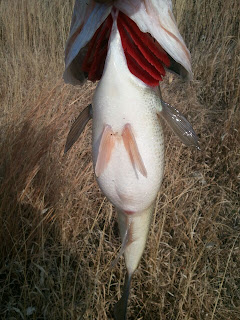 No more fish to be had in that spot after a dozen more casts. I still wasn't fishing directly on the shoreline that received the most wind so I moved down to a third spot. I usually don't like fishing this shoreline since I rarely have caught anything there....and it is usually pretty shallow. I started off with a BPS Egg crankbait, casting towards the wind blown shore and working it back at a slow steady pace. A dozen casts or so into it and I finally had a bass smack the snot out of the bait! He was tugging hard and took one good run and the trebles popped free....S#*@! Lost a nice one.

I thought that was going to be the only fish on that side since I haven't caught more than one there...but I stuck it out anyway. No more bites on the BPS Egg so I switched up to a KVD 2.5 Squarebill in Blue Herring. The KVD squarebill has a slightly tighter wobble which seems to be somewhat more productive in colder water situations. That theory is debatable...but it all depends on the day I guess. Anyway, after giving it a few casts without a bump I decided to try one more crankbait. I thought it wasn't going to make a difference but I tried it anyway. I switched to a KVD 1.5 Squarebill in Gizzard Shad (white side with black back). A little bit smaller of a bait...and a color that probably more closely resembled the shad that I saw in there a few weeks prior. (Just a tip, but the gizzard shad, blue gizzard shad, and green gizzard shad match quite a few of the species of shad found in Illinois).

First cast with the different squarebill and BAM! And by BAM I mean the fish stopped the lure dead in its tracks! 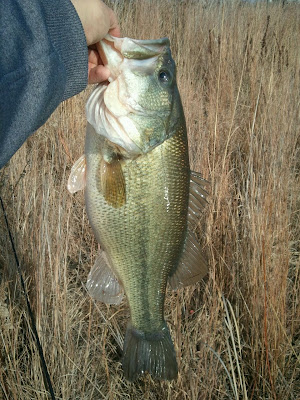 Three casts later and another smack of a bigger fish! 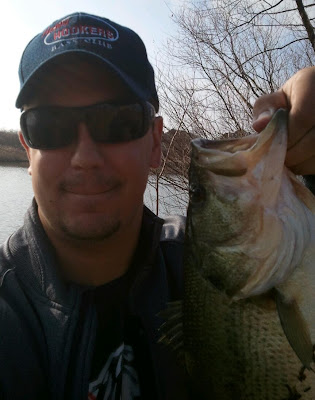 After awhile of catching them on that particular squarebill I decided to experiment. Did they really key in more on the action, or was it the color driving them nuts? I took out a YUM money minnow in the same black/white pattern and put it on a swimbait jighead. First cast with the swimbait and it was slammed! Had him on for the first few seconds and then the hook popped free. Definitely need to get better on timing my hookset with weedless jigheads! Just goes to show you though that having a bait in the same color with slightly different action might allow you to pick up a couple more fish that weren't as interested in the previous bait.

I tried for a little while longer, but no more fish were interested in eating my crankbait. So I moved farther down to my fourth spot. Took awhile to get anything to bite in that spot...but after a little bit of time throwing the swimbait I had a bass finally erupt on it just below the surface. I reared back on the hookset and as soon as I went to turn the reel handle....he popped free. Lost fish #2. Not to be put to shame, I switched back to the squarebill to see if I could get him to bite again. Sure enough, three more casts and he about ripped the rod out of my hands!

Again, the bite turned off so I started making my way back around the other half of the lake. On the fifth spot I continued to throw the squarebill. The next bass I caught I saw the whole strike from start to finish. I saw the squarebill wobbling back towards me and I saw a big wake making a v-line towards my bait. I saw the bass come up right behind it....saw and felt the strike bolt right through my rod....and I set the hook. The fish all but swallowed the bait! 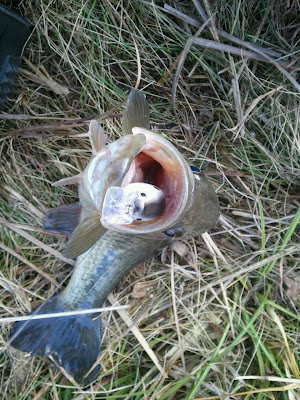 I moved to my 6th and final spot after lull in the catching to see if I could find a couple more fish in another corner I usually do well at. Nobody home. Threw everything I had one last time without a bite. By that time the sun was starting to set and the air started to get a little cooler. Just about time to head home.

So in review....what worked for me today? 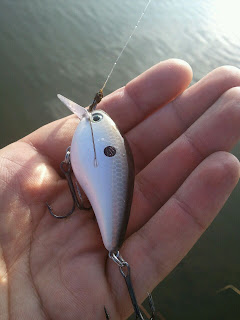 - Wind blown shorelines
- Isolated rock and weeds
- Plastics, Crankbaits, and Swimbaits
- Switching spots and changing casting angles
- Experimenting with different sizes and colors of lures
- Staying on a spot for awhile longer if it produced a fish


Here is an overview of my fishing spots that I chose....the lines show the direction of the casts where I caught my fish. The brown circles show submerged wood and brush, and the gray circles are submerged rock. 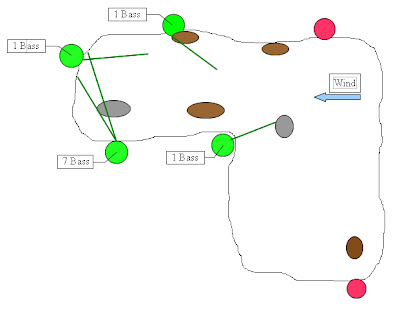 All I can say is that this is the latest in the season that I have ever caught fish in open water. Who would have thought I would be standing outside in jeans and a t-shirt fishing, instead of shopping for Christmas presents? Truthfully I couldn't have spent the day any better doing anything else.

I will confirm now that this is the last open water outing for me this year. No fishing until I can freeze my butt off on hard water! Hope you guys have a good Christmas, and you get tons of new fishing gear. I believe I am getting a few new things this Christmas....can't wait to get my hands on it and field test next year!