Open water season is officially over for me this year, but not without one last weekend of unseasonable fall weather.  This was roughly the same time last year when I hung up the rods to prepare for hard water, so I was hoping for similar results.  The weather settled in the low 60's which was warmer than I expected, and there was rain in the forecast for both Saturday and Sunday.

Saturday I was only able to fish in the afternoon from about 1:30 until 4:45...but in that short period of time I found myself in the middle of a feeding frenzy!  On days like that I look for several key things.  The first would be to target the wind blown side of the lake...although in the fall this makes casting a pain in the a$$, the warmer water tends to be pushed to the wind blown side of the lake.  The second thing was the warmer air temperatures and rain...warmer air will warm up the rain water which will slightly warm up the lake, which can cause quite a difference with lake water dropping into the 40's and 50's in recent weeks.  Next would be targeting isolated cover...by isolated cover I mean brush, remaining weed beds, non-accessible or overgrown shorelines, and rock.   The cold water kills off weedy areas and usually clears up the lake which allows you to locate cover you may have not seen earlier in the season.  Usually bass will hold onto what they have left for ambush points.  The last thing I look for is baitfish.  Bass boiling on the surface means only one thing....feeding time!  That is exactly what I saw when I arrived...wind blown side, some weeds and overgrown shoreline, and bass boiling the surface of the water.

Some lures that I keyed in on them with were crankbaits, spinnerbaits, small swimbaits, and the "old faithful" weighted texas rigged creature baits.  First cast to the adjacent shoreline with a crankbait....wham!  Fourth cast with the crankbait straight out from me...boom!  Then the crankbait bite died.  I switched to the small swimbait and the feeding continued.  The bass were out for blood...and they were gorging on these baits as soon as they got a hold of them.  Some were so aggressive to the point where they were biting the tails off of my swimbaits and bending out my hooks! 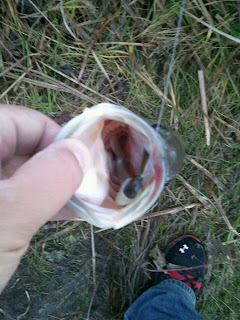 The crankbait that I was using was the Bass Pro Shops "The Egg" crankbait.  XXX Shad and Texas Shad were my go to colors.  The small swimbait that I was using was a 4" YUM money minnow in a silver/black back pattern.  That rigged up with a 1/4 oz swimbait jig head worked out perfectly.  The spinnerbait that I was using was a white/chartreuse double blade spinnerbait by Flatlands Custom Tackle.  Great color for slightly stained water...worked like a charm on these hungry bass.  The last bait was my Netbait Baby Paca Craw in Summer Craw and Bama Bug with an 1/8 oz bullet weight.  If I didn't get them with the first three, I bounced the bottom with the craw and picked up the other sluggish bass in the area.  They were fat to say the least...like balloons ready to pop. 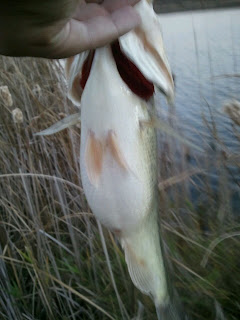 At the end of Saturday I walked away with 15 bass between 12 and 16 inches.  Three or four were spared on bad hooksets and air acrobatics.

On Sunday I decided to start earlier around 9 AM and made my way over to a new big fish spot that I just started fishing last month.  If anything I was hoping for that one big bite before a good quantity like yesterday.  I started out with the Paca Craw and slowly combed the bottom searching for those 4 and 5 pounders...all the while trying to not let the wind push me into the lake with those 30 and 40 mph gusts.   Kind of nice though having the wind at my back because I was launching that craw halfway across the lake.  About a half hour into it I went to go pull in a couple more feet of line when it felt like my lure was stuck on something.  Unfortunately I didn't think anything of it and popped it free....just weeds I guess.   About 15 minutes later I felt the same thing.  I just left pressure on the line without popping it free and before I had a chance to get a better feel of what was going on a huge tug at the end of the line bent the pole over.   I laid into the fish as quick as I could and we were off to the races!  I knew it was a good fish and the size of the boils got my heart racing.  It was a tough and long fight, but I landed her without issue.  A nice and healthy 19.5" largemouth in the four pound range.  I took a quick picture and set her back down in the water.   It was interesting to see such dark colors on a bass this late in the season....but since the water is so shallow in this lake it wasn't too unexplainable.

Next spot yielded three more bass with two lost.  Two on the crankbait and one more on the craw.  Just about when I left I ran out of the paca craws and switched up to a chigger craw to finish up the day.  A new thing that I just started doing was dipping the appendages of my plastics in some chartreuse "spike-it".   Especially in darker water, the chartreuse stands out really well and drives the bass bonkers!  First cast with the chigger craw I get a really faint bite.  I wait and wait and then I see my line taking off.  Set the hook and the hook comes flying out and I see the flash of a nice bass turn up towards the surface and back down into deeper water.  Crap!  I tried several more casts to get another bite but nothing. 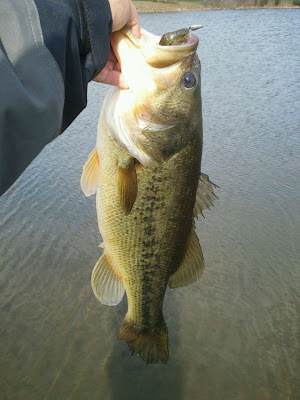 21 bass for the weekend....and then it hit me...I just blew past my 700 bass mark for the year.  I finished out the year with exactly 710 largemouth + smallmouth.  To say the year was great is an understatement.  Of those 700+ fish, 3 of them were over 5 pounds, 15-20 of them were over 4 pounds, and 60-70 of them were over 3 pounds.  Not only were they quality fish, but they were caught on tons of different lures....some of which at the beginning of the year I had no clue how to use.  That was a feat within itself.

Next year is going to be different though.  Although I caught a ton of bass, the mission next year will be to catch more smallmouth.  I still have very little knowledge of those brown brutes....so hitting the river next year will be on my to do list.  The other mission for next year will be breaking my personal best bass record....with hopefully a double digit bass.  My Dad and I are scheduled to head down to Lake Faclon for three days next May...now that is going to be an interesting trip!

Until next year guys, look out for any ice fishing trips and possible river wades.  I know that fishing won't be completely cut out of the picture the next four months....cabin fever sets in pretty quickly around here.