Over the last couple of weeks I got a chance to get out with fellow DA member Gatorshaun on a couple local lakes to target some largemouth.  Our first trip was to Shabbona lake which is about 40 minutes or so West of Aurora, IL.  It isn't a huge lake by any means, but it has a lot of different types of cover which is perfect for some good practice.  I didn't know what to really expect so I brought a spinnerbait rod, pitching rod, dropshot rod, crankbait rod, and an extra all purpose spinning rod.  Probably way more than I needed....but I couldn't say I wasn't prepared to hit some new water.

We started out fishing the North end of the lake which has a couple nice points, submerged timber and a good amount of weeds and lilly pad shorelines.  I started out throwing a frog with little luck on the lilly pads, so as we moved towards the timber I switched up to a spinnerbait making sure I crashed my bait into every little piece of cover I could see under the water with my polarized sunglasses.  No takers though on the spinnerbait which was really surprising considering the amount of fry and baitfish around.  There were so many in some areas that it looked like there was current on the water when in reality it was just the baitfish moving along to new areas in the lake.

I switched it up to a jig after the spinnerbait wasn't working and it didn't take very long to land my first fish.  Gatorshaun by this time already had a couple fish in the boat so I had to make up some ground.  I was using a 3/8 oz California Reservoir Lures jig in their "Rusty Craw" color.  I used a Netbait Paca Chunk trailer in craw as well.  This combination has worked really well for me this year in slightly stained water because it really stands out and has a natural color to it.   After pitching to a few stumps I didn't get anything but then I saw a stump butted up right next to a weedline.  I made several casts to the same stump trying to hug the sides of it as best as possible.  I let the jig fall all the way down until I could see my line stop sinking.  I lifted the rod up just enough to feel the weight of the jig and that's when I noticed a difference.  There was a little extra weight to the line then my previous casts so I reeled down slightly and set the hook.  My line takes off and on the other end was a nice 3+ lb largemouth.  Shaun jumped for the net and we landed her after a few good jumps. 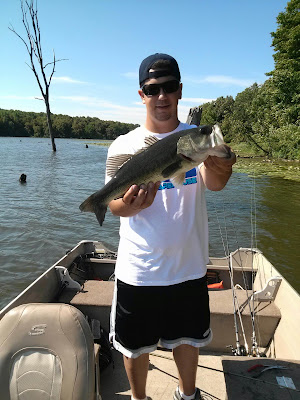 That is what I have found so exciting about jig fishing especially on submerged stumps because that moment of anticipation to watch your line either fall to the bottom or start moving away slowly from your target will tell you if you have a fish or not.  You have to be really aware of how that lure feels normally as opposed to a fish on the line.  That is why a good rod and reel setup are so critical for this technique.  That day I was using a Shimano Curado 200E7 paired up with a Kistler Magnesium 7' 0" Heavy Fast action rod with 50 lb Power Pro braid.  I have to say it has been one of my favorite setups so far this year and has worked well when I needed a little extra power to pull fish out of some nasty cover.

Moving on though with the day...all I can say it was tough for awhile.  With 90+ temperatures and blue bird skies we didn't end up getting into any more fish until we moved into a nice flat with a bunch of scattered weeds.  I tied on a 4" green pumpkin chigger craw along with an 1/8 oz bullet weight and it didn't take long for another fish to tug at the end of my line.  The bullet weight allowed me to punch through some of the weeds and into the empty pockets in the weedline which seemed to be where the bass were hiding.   Within the next dozen casts I caught 3 more bass.  Not the size of my first fish but still in the 12-14" range.  After catching those 3 Shaun switched up to a similar setup with a different plastic and picked up a nice bass on a black and blue colored Havoc craw.

We fished the rest of the day and caught a few more fish.  Together we ended up with 10 bass with probably the heaviest 5 going about 10 lbs.  Not too bad for being the middle of July and after talking to other guys it was pretty slow for them as well.  For those of you wanting to hit Shabbona in the future they have a good amount of boats for rent so it is just a matter of getting out there.  It is a little expensive, but it would be definitely worth the trip.  Just wish we got into some Musky while we were there.  Oh well.

Round 2 was the following weekend but at a lake that Shaun and I fish fairly often around the area that has yielded some nice fish.  Shaun usually gets out there on his kayak so he offered to have me come along and borrow one of his other kayaks for the morning.  Now I was completely out of my element....especially from the confines of a single person kayak.  Only could bring one pole with me and a small bag of plastics and other miscellaneous lures.  Luckily I was there last week so I knew roughly what to expect and packed just enough stuff for short morning trip.

I met Shaun at 5 AM which was surprisingly rough for me to get up and out there that early.  I was still sleeping in the car when Shaun started knocking on my window to wake me up and let me know the kayaks were already down by the lake.  I have never fished from a kayak so I thought it was going to be a rough day, but after about 10 minutes of paddling around it actually wasn't too bad.   I threw on a buzzbait (my favorite 1/2 oz booyah) and immediately started catching fish.  It took a couple misses to finally get the hookset down but it worked out alright.  We worked a weedline that I have caught many fish on and after awhile Shaun and I just stopped counting.  Buzzbaits, craws, senkos, zoom flukes, crankbaits, we caught fish on everything.  I was mad though after digging through my small bag of tricks that I only had one Smokin' Shad Zoom fluke with me because bass were blowing up on shad for a good part of the morning.  I rigged up the only one I had and caught 3 bass within a few casts of each other just by throwing into the blowups and twitching it a few times.  After I brought back the mangled piece of plastic that once resembled a fluke I tied on my other stand by which was a watermelonseed fluke.  Same lure, just a different color and I couldn't buy a bite on it.  Match the hatch won that battle pretty easily, so I switched it back to a craw and continued catching.

We worked our way down to a hidden dropoff that Shaun found after his many trips to that lake and it wasn't long until he tied into his first pig of the day.  I saw his pole bend over as soon as the fish made it's first good run.  I watched Shaun battle him for a little bit and then I saw the rod tip pop back to its original position....line broke.  Man does it suck when that happens!  It wasn't long after though that Shaun hooked into another good fish with a crankbait around the same area.  He landed this one but not without getting a treble hook to the finger.  He weighed the fish and it tipped the scales at 4.5 lbs, not a bad fish at all for the area! 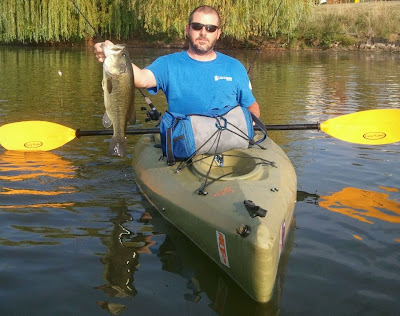 We fished until about 9:30 AM as we made our way around the perimeter of the lake.  After all was said and done if I had to guess we had roughly 40-45 bass landed with another 10 or so lost.  The biggest five weighed around 13.5 lbs.  Probably one of the better days I have had this year....and all out of a kayak with one pole!  Just goes to show you that sometimes you really don't need that 50 lb dufflebag of everything fishing to just catch a few fish.   But where would the fun of it be if I couldn't buy some new tackle every once in a while....lol.

Just another testament to the memories you could have just being a member of Dupage Angler.  That's the whole point of it, getting out and having fun and making a few friends along the way.

Thanks for reading guys and good fishing!

Fluke
Posted by Fluke at 1:19 PM
Email ThisBlogThis!Share to TwitterShare to FacebookShare to Pinterest