The Kankakee river was another new stretch of water that I had the first opportunity to fish on Sunday...and man was it just as tough as the last few tournaments!  Warm water, dirty water, a ton of boat traffic, and hardly any current.

A total of 36 anglers showed up at 4 AM, and there was a lot of talk of the low weights being brought in the last few tournaments.  Limits of 5 fish were few and far between so getting a few fish today would put you in good contention for a payout.  I drew boat number 17 which was an awesome Nitro boat that belonged to a guy named Curt....a 5 year veteran of the ABA.  It was a pleasure fishing with him and got to learn quite a bit about the river after picking his brain most of the day.  We wanted to fish this one area first thing in the morning...but since we were boat 17 the cut was already loaded with boats by the time we got there.  So instead we flew to his next spot which looked like it could hold some decent fish.  A deeper 17 foot channel lined with lily pads, tons of brush and lay downs on the opposing shoreline...and there were shad and fry jumping everywhere!  We tried frogs, topwater poppers, swim jigs, crankbaits, spinnerbaits, c-rigs, dropshot....you name it, we threw it...big ol' nada!  Just could not believe it...a prime spot with a ton of food and the fish were just not willing to bite.  We were marking fish, but just couldn't figure out what they wanted to key in on.  After burning about 3 and a half hours there we made a run up to a submerged weed flat that was a money spot for a previous tournament.  We saw a few bass scatter and threw frogs and topwater for awhile...still nothing.

After looking at the clock it was close to 10:30...weigh in was 1:30 and we had no fish in the boat.  We went to the next spot up against a couple of barges and submerged trees.  I took out the dropshot while my boater fished a shakey head.  He finally got a bite and pulled in a small 5" bass.  It wasn't big enough to keep...but it was a good sign of active fish.  Fry were all over the place and there were plenty of gar following them.  With the day we were having...I was tempted to tangle with one of them!  But I stuck it out and continued with a dropshot.  I switched from a small senko to a finesse worm that I recently learned of from a fellow club member...its turning out to be one of my favorite drop shot baits.   I took a few more casts at the submerged tree and finally had a bite myself...a small 7" bass.  Still nothing in the livewell.  We stayed there for a bit more but couldn't get anything else to commit after several missed strikes and breakoffs on the submerged tree.

We continued to the other side and fished one final point before we trekked back towards the boat ramp.  My boater got a few bites on the shakey head and missed a couple...I immediately tied on one too but didn't get any bites.  That is one technique I will really have to start devoting more time to...it can definitely get you some bites when you are hurting for some!  After still having zero in the boat it was about 12 pm and we made the run back towards the ramp and that first spot that we decided to not hit this morning.  HOLY CRAP was it a blessing he had a handle on his boat to hold onto...the boat traffic was a mine field in and of itself with all the party boats and jet skiers not paying attention going down the middle of the river.  I guarantee that Nitro got air at least 3 or 4 times!   It was nerve wracking, but man was it nice to run around in the boat for a bit after baking out in the sun for the last 7 hours.

We pulled up to the last cut with about a hour left...as soon as we came up to the spot we saw 4 boats trying to still fill their livewells.  It was the last chance we had, so we moved in anyway with the heavy boat traffic and worked a shady section halfway down the cut.  My boater and I started throwing spinnerbaits....with the lily pads and thin grass all around mixed in with that perfectly stained water...spinnerbaits were all that came to mind.  Now when I mean perfectly stained water...I mean this water just had the right mix of tinge in the water to where you could see a bright colored spinnerbait perfectly about a foot and a half down from the surface.  White and chartreuse was all I had available...so I went with it.  After about a dozen casts, my boater switched back to his topwater popper and was hitting the hardest to reach spots underneath the brush piles.  I had to give this guy a ton of credit with how he was dissecting every inch of water with a spinning setup...that popper would have been hung up in a second if I did that!

Well, we continued on and we came up to one of my club members that was moving out of the cut.  He had two in the boat, which got me a little frustrated since I had nothing...but there was still some time left.  My boater continued with the popper on the right side while I fished with the spinnerbait off to the left.  I saw a nice lay down with a limb sticking up just under the water.  I tossed the spinnerbait in and slow rolled it past the limb....nothing.  I threw it in again...and as I was bringing it back I could only think of one thing...run the spinnerbait into the limb.  I have seen KVD and other fishing phenoms always talking about crashing their baits into cover...so what the hell, lets go for it.  It was like something out of a fishing show what happened next...I redirected the spinnerbait to run right into the limb, and as soon as it deflected off the limb...WHAM!  My rod doubled over as I set the hook and my boater dove for the net.  After a couple of good splashes we got her in the net...holy cow was I stoked!  My legs were shaking and I was just on cloud nine with what just happened.  It was textbook...nothing in that event could have went any more perfectly!  With a fish in the boat we fished the rest of the cut pretty hard.  I felt terrible at the same time for my boater since he didn't have a fish in the boat...and to make matters worse he finally got one to blow up on his popper and he lost it under the pads before he even got it to the boat.

Here was where we were fishing....man it looked like frogging heaven! 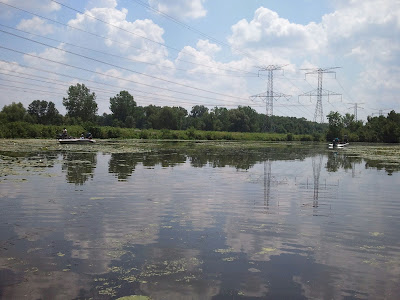 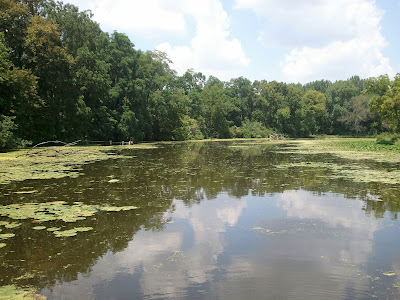 With only a few minutes left we packed it up and ran to the launch.  Again, a lot of people either zeroed or had 1 or two fish.  Only a few people had a limit with the most weight coming in at 8.35 lbs for five fish from Mr. Dave Schultz.  I was just guessing in my head...but I had a feeling my fish was pretty darn close to 4 lbs.  I brought it up to the weigh in and immediately people were looking into my bag to see what I had.  I pulled out the fish to weigh her in and immediately people stopped to see what the weight was....3.94 lbs!  It was just shy of putting me again in the top 6 but I finally claimed big bass honors for the first time!  It has evaded me twice this year...but now I can finally say I caught the biggest bass of the tournament.  My one fish was still good enough to get me 8th place out of 36 anglers...and our club claimed first, fifth, and sixth place in the money.  In our club though I came in fifth place in points.

A picture of Dave getting awarded first place.... 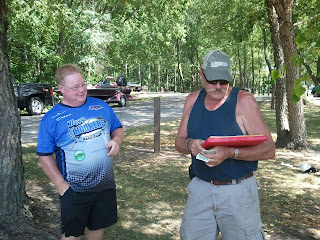 Below is a picture of my fish which was caught on white/chartreuse Strike King spinnerbait... 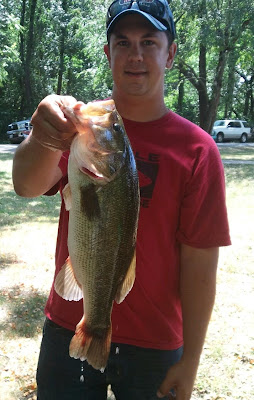 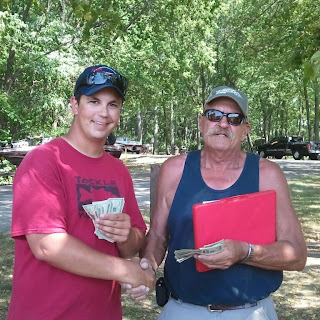 It wasn't a stellar performance, and having a limit in a tournament still hasn't happened yet...but I would take the feeling of having big bass of the tournament any day.  It was a great ending and I learned quite a bit....big thanks go out to my boater Curt! But man was I wiped out after...anyone fishing in the near future, make sure you have a ton of liquids with you so you keep hydrated.  This hot weather is a terror!

Thank you for reading and I will be back on the water down at Clinton Lake for the last regular season ABA tournament.  Last I checked I was sitting in 5th in the ABA...and I am now holding 6th place in my club with one tournament left in September on the Mississippi.  Let's keep the momentum going!!!

Fluke
Posted by Fluke at 9:22 PM
Email ThisBlogThis!Share to TwitterShare to FacebookShare to Pinterest