As the end of March was nearing closer and closer and knowing I had a short period of time to get some fishing in...I knew I was going to be close to hitting that 100th bass mark.  I only needed to land 8 fish, but I knew with the cold temperatures and wind the fishing could potentially be a bust.

I sent the word out that I needed some help in completing my goal for the weekend and I got a call back by the one and only PondBoy!  We made plans to hit a few spots that have been hot lately and that could potentially hold some PIGS.  Why not go out with a bang right?

I met Pondboy early Saturday morning at 7 a.m....he arrived at the lake sooner than I did and had good news that he already landed one fish on a Big Hammer swim tail. 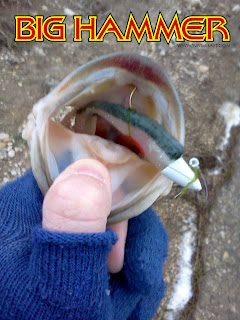 He met me farther down the shoreline and we started picking apart every inch of water within casting distance.  Fish number one came within the first half hour to my surprise on a 3/8 oz California Reservoir Lure jig with a Berkley Chigger Craw trailor.  He smacked the jig on the fall and I easily felt the bite on my FSA Custom Hydra Stick.  With a short fight...I had him landed.  Only 7 more to go... 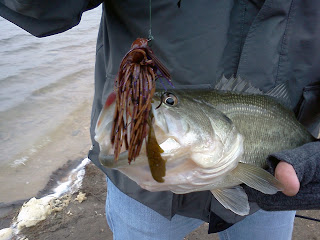 Shortly after Pondboy got one on a rattle trap and mocked the bass because he knew it had fallen prey to one of the most common rat-l-trap colors known to fishingdom...the red craw! 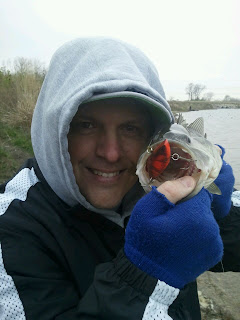 I threw around the jig a little longer...eventually got hung up and had to cut the line.  Only bad thing about Power Pro is the fact you can't snap the line even if you tried...so I had to cut it by hand.  I had a backup plan though in the works in the form of a 1/8 oz shakey head rigged with a Yamamoto grub.  It wasn't long after that I got one good bump and the bass was off to the races!  It took me a few seconds to get him in becasue I only had 8 lb fluoro on my reel...but bass number 2 was landed!

The wind started picking up and with the air temperature being colder than we expected we decided to move spots and head to the second location.  We arrived at the second location and started at my usual spot. It took a little while until I finally hooked into the third fish...who proceeded to inhale my Zoom Super Fluke. 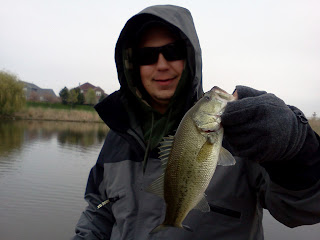 Pondboy and I saw quite a few fish busting the surface off the shore so we put our brains together (insert joke about our intelligence here) and finally came up with a legitimate solution...shallow jerkbaits!  First cast on a Rapala Shallow Shad Rap in Silver/Black and it was game on!  Fourth fish was landed! 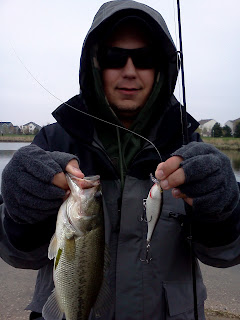 ﻿
﻿Pondboy followed suit by throwing on a Rapala X-Rap in a similar shad pattern and boom! 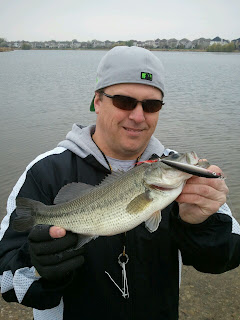 The action seemed to all but stop at that moment and the fish must have wised up to our tactics.  We tried a few more spots but no more fish came knockin'.

We left the second spot for our last and final spot.  This was Pondboy's pride and joy so we made sure we erased our tracks and set booby traps as we made our way down to the honey hole. :)﻿  I fished the first pipe that Pondboy (PB) recommended...no one was home.  Meanwhile, PB hooked into a nice one off to the left of me on a rat-l-trap. 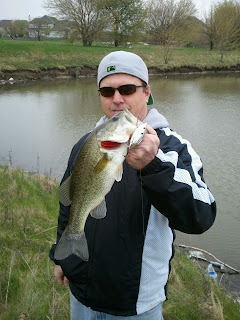 I moved farther down to another pipe that was butted up against some nice brush piles from an overhanging tree.  I made a few pitches in the area with my Shakey head and Yamamoto grub...no one was home again.  I switched to a Rat-L-Trap since PB was doing well with that, but again nothing.  I decided to try the Shakey head at the same spot one last time...I bounced the grub towards the surface and that's when the first PIG showed its face...the big bass came up and turned after the grub as it fell back into murky water.  I waited until the line went tight and I set the hook!  Bass number 5 was on the board! 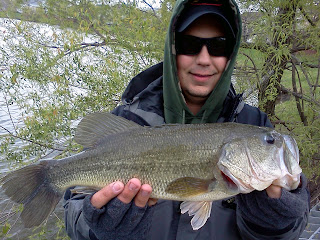 Meanwhile, PB switched to a white/red spinnerbait farther down the shore...while working it parallel to the shore he hooked into his first PIG of the day! 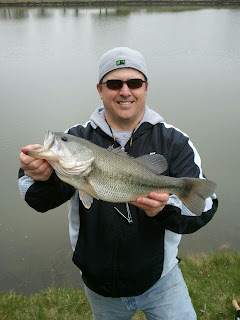 He threw the fish back and began to do the same thing over with the spinnerbait.  He got smacked again by another big fish...and then it was gone...hook came undone.  PB was on to something since he had back to back bites.  In this type of situation I always like to expand upon or mimic the pattern a little bit differently so coax the bass that may have thought about biting too.  I knew spinnerbaits were the ticket...but what kind?  Murky water...wind...what to choose?  Then it hit me...murky water means that the bass key in on bright colors and noise more often than not.  Luckily I packed a few spinnerbaits the night before and pulled out one of my new Single Colorado blade 3/8 oz Revenge Spinnerbaits in Shad pattern.  I walked over to the area where PB had missed his last bite.﻿  Threw the spinnerbait out and worked it back slowly parallel with the shore.  I felt the buzz of the blade turning over and about half way back the spinnerbait vibration stopped dead like it had hit a wall.  I set the hook hard and fish number 6 was in the books!  This one was close to 4 pounds! 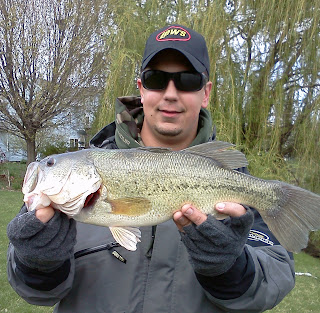 I worked down the shoreline with the same pattern.  I heard PB yell to me that he had another on...but the fish turned on him before he could see it and snapped right through his 12 lb test mono.  A few casts later I was working the spinnerbait towards me...it was about 10 feet away and I could see the flash of the big Colorado blade under the water.  Next thing I know this bass comes out of nowhere trailing the spinnerbait...I stopped my retrieve while still slowly pulling the spinnerbait as the bass inhaled it!  I set the hook and number 7 was landed! 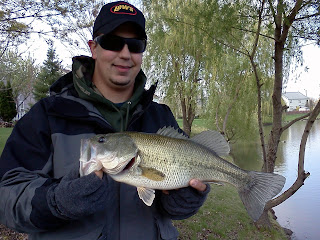 It was now around the 1 o'clock mark and PB made a few casts and we had to go our separate ways.  I thanked him for helping to put me on fish and I left to go back to a few more spots.  I knew I only needed one more fish to hit 100 so went to the most likely place that it could happen.

At that point I was 100% keyed in on using the spinnerbait...and knowing this last spot also had murky water it was bound to work...right?  Five casts later with the spinnerbait and fish number 100 for the year was on the line.  He wasn't a pig like the others but he marked a giant step in my fishing career. 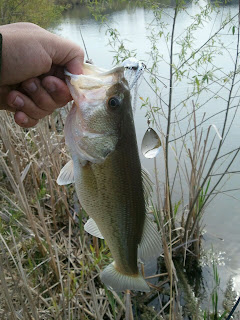 I have never in my life have caught this many fish this early in the year.  The earliest to date for catching fish for me was late April...and even that was pushing it.  I have to thank DupageAngler.com for most of this because they have pushed me to fish more often and to fish smarter.  I have learned so many things from others on that site that my versatility as an angler has doubled within the last couple years...so thank you to all the people that helped get me to this point!

After the weekend was all said and done I am now up to 115 bass for the year so far.  It has been really helpful logging my catches because it will help me that much more next year for patterning bass throughout the year and for different lake conditions.  It will be interesting to see come October or November what my numbers will be when I finally have to hang the poles back on the wall for next spring.

Thanks for reading and please comment on what you would like to see more of in the future!  Send all post requests to Alan@DupageAngler.com I want to pay it forward to all my readers so if I can help you succeed, then you are making all of this writing worth while!

Fluke
﻿
Posted by Fluke at 11:30 AM
Email ThisBlogThis!Share to TwitterShare to FacebookShare to Pinterest