Easter weekend was right around the corner, so that meant nothing less than a 3 day weekend to get out on the water and do some relaxing!  The morning predicted temperatures for the weekend had dipped down into the frost zone so it was going to be a toss up whether this awesome spring fishing was finally dying down for now.

With no one home and Friday open to do some fishing I decided to brave the weather and head out to a local Naperville Forest Preserve Lake. Since the water temperature had dipped down I knew I was going to have to focus on a colder water bite...rat-l-traps, shakey heads, jerkbaits, and flat sided square bills were all ready to go on seperate poles.  Luckily I had my rain suit with me so the cold weather was a bit more bearable, but the winds were definitely unkind to my exposed face and hands.  I walked to my first spot and decided to use my shakey head for awhile that had a Yamamoto grub texas rigged on it.  I threw atleast a dozen casts hopping and dragging the shakey head along the rocks on the bottom trying to imitate a fleeing craw...but no takers.  I put the shakey head away and tried my luck with a suspending jerkbait...first cast...SNAG!  Tried popping it loose for a couple minutes but eventually conceded defeat...there went a 16 dollar Lucky Craft Pointer >: (  Lake 1...Fluke 0.  I switched back to the shakey head...threw about five more casts still ticked off about losing such an expensive lure...but then finally felt a hard thump from a hungry bass.  Took about a minute to get him in but fish number 1 was on the board for today.  38 degree air temperatures and 10-20 mph winds and I was able to land a fish.  I could have not cuaght anything the rest of the day...and I would have been perfectly happy with the fact that I got rid of the skunk on a day like today. 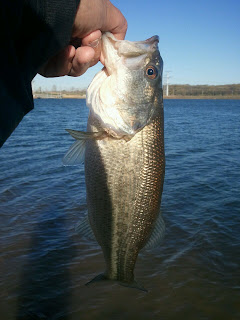 After I landed that one I decided to move over to a different spot on the lake where I had luck earlier in the week at.  What was unique about this area was the combination of sparse vegetation, big and small boulders, less exposure to the wind, and somewhat of a significant dropoff from the shore.  The main things that I thought were significant was the decrease in wind (for my sake mainly), and the fact that there were alot of rocks there. Rocky bottoms are one of the best forms of heat sources for bass when the water temperatures are colder.  I took out a flat sided Lucky Craft Squarebill and started performing the same retrieve I used last Wednesday.  I use the rod tip to pull the lure towards me and then reel in the slack towards the lure to give the lure time to float back up.  This caused two important things to happen...allowing the bait to be pulled deeper to the rocks allowing it to collide and deflect with the cover...and then upon retrieving the slack, you allow the bait some time to float up in the water column slightly to give on looking sluggish bass a chance to strike.  I threw the squarebill out...pulled the lure twice...hit some rocks...paused...and FISH ON!  Bass number 2 was landed and he was a fatty!  2 lbs 12 oz and probably 16" in length.  A nice fish to bring to the scales any day of the week. 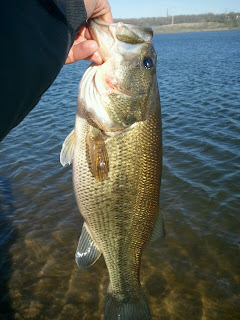 ﻿
The pattern worked perfectly on the first cast...but bad luck set in catching a fish on the first cast with the new lure and there were no more takers to be had in the area.  I decided after a few dozen casts of the squarebill that the water temps might still be too cold for the erratic action of the squarebill.  I then switched it up to a Rapala Clackin' Rap.  Knowing that I couldn't run the lipless crank too deep I decided to yo-yo the bait keeping it just above the weeds and rocks.  It took a few casts to get the bass feeding again but I ended up getting back to back to back fish...with the biggest one tipping the scale at exactly 3 pounds. 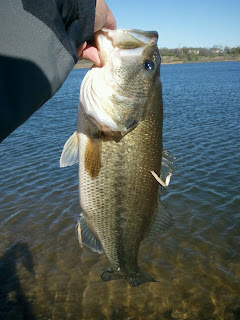 But with all success there is always some form of failure...and boy did things go south in a hurry.  Ended up snagging the Rapala Clackin' Rap on a boulder since I got too greedy and let it sink too long...there went another 10 bucks.  Lake 2 Fluke 5.  Moved spots, tied on another lipless crank.  Wound up for the next cast, in the backswing I snagged a bush behind me and as I threw forward the reel exploded with fluorocarbon!  That reel was toast for the day and so was the line...goodbye 20 dollar Seaguar 15 lb test!  Lake 3 Fluke 5. 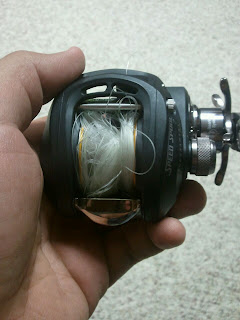 That was soon followed up with a shakey head snag and a snapped line on a good fish.  There went another 5 bucks.  So with the total reaching 50 bucks in lost lures/line...I counted my blessings with﻿ landing 5 decent fish for the day and decided to leave.

Moral of the story for the day...If you can't afford to lose it, don't buy it at all!

I had a short window of time in the morning on Saturday since I had Easter obligations that afternoon so I decided to make a quick trip to one of my favorite spots and had ThePatrickBrewer from DupageAngler.com join me since we were both free that day.  Patrick is new to baitcasting and ended up getting a baitcaster a few weeks ago so today was going to be a good day for some practice!  Again with the morning being so cold, I thought it was going to be a hum-ho day like yesterday...but that turned out to be dead wrong!  We started throwing Strike King Swim Jigs tipped with Big Hammer Swim Tails with nothing really coming within the first 15-20 minutes.  After that short skunk period, I finally got my first bite of the day, a small 13-14" bass that pounced on my bluegill colored swim jig.  With little interest from the bass with my swim jig thereafter...I decided to switch over to a Red Eye Shad in Bluegill pattern.  I started doing the yo-yo retrieve again like I was yesterday and it wasn't long until I hooked into the first beast of the day!  This BIG female hit my crank twice before finally taking hold and giving me one of the better fights I have had all season.   I got her to shore quickly seeing that she was barely hooked.  As soon as I reached down the hook popped free and I had to react quick to land her without her taking off back into the pond.  Luckily I snagged her at the last second! 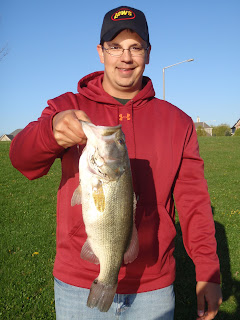 It wasn't long after landing that fish that Patrick jumped onto the lipless crank bandwagon.  I started to teach him how to yo-yo the bait...it took a few minutes but I think he got the hang of it! 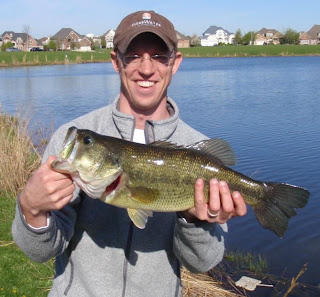 He landed this second monster 19-20" bass.  She weighed in at 3 lbs 8 oz.  I knew this pond had some monsters, but two in a day was unheard of!  We worked our way around the rest of the lake picking off bass on lipless cranks, swim jigs, squarebills, and texas rigged plastics.  I would say between the two of us we probably walked away with around 35-40 bass by the time we left around noon.

All in all it was another great weekend spending time on the water with another fellow Dupage Angler!

Thanks for reading, and tight lines!

Fluke
Alan@DupageAngler.com
Posted by Fluke at 7:47 AM
Email ThisBlogThis!Share to TwitterShare to FacebookShare to Pinterest