With all of the frustration with work coming to a grinding hault on Friday I knew that the coming weekend was going to be my only opportunity to unwind before I started over again on Monday.  The forecast for Saturday and Sunday continued to push the 72+ degree mark so I knew I was going to be in for some decent fishing.  I called my Dad up Friday night to ask him if he wanted to join in on the outing and told him where to meet me at the following morning.  Fortunately I was off the hook for most of the day on Saturday so my Dad and I decided to hit two separate ponds...both in the Dupage County area.  My Dad arrived at the first pond about a half an hour before I did since I lazily snuck in a few more minutes of sleep before I headed out to the lake.  Unfortunately I missed a good opportunity because by the time I showed up...my Dad had already landed 5 bass.  Luckily for me...that action lasted the entire day!  Every spot we hit up and down the first lake we pulled out atleast 6+ fish a piece.  Both of us switched off between crankbaits, zoom flukes, and zoom brush hogs.  The fish were all within the 8 to 18" range with the average fish coming in at 12-15".  I have never seen my Dad have this much fun in a while catching this many fish...so I was happy I was able to spend that time with him.  Of course the trash talking came out with him being in the lead most of the day, but after awhile we just lost count of the number of fish that we hooked into.

Well the fun came to a screeching hault when my Dad yelled over to me that there was a cop parked behind my car on the side of the road.  To retrace my steps as to why this was happening...earlier this morning my Dad decided it was OK to park on the road next to the lake where there was obvious signs that said "NO PARKING".  I went against my better judgement and left my car there and my Dad ended up moving his truck farther back down the road when he moved to his new spot.  Needless to say I dropped all of my gear and ran half way around the lake as I saw the cop putting a parking ticket on my windshield!  I yelled to the cop what had happened before he drove off, and luckily he was nice enough to just tell me to move my car and that he only gave me a warning.  Note to self...never listen to my Father again on where to park.

As a side note to all of this...GatorShaun, a fellow DupageAngler.com, member was on the same lake in his kayak when this happened and witnessed me running clear across the lake to catch the cop before he left.  I didn't realize it was Shaun in the kayak so of course I get a text message a few minutes later from him "enjoying the parking ticket?".  I was busted! haha.  With my Dad also being parked illegally further down the road I knew we were pressing our luck and decided to leave for the next pond.

We headed to spot number 2 and found two cars already parked next to it.  I was kind of mad at the fact that our favorite secret spot was starting to become not so secret...but hey, you can't keep the fun from everyone.  My Dad and I started at our usual spot and made our way around the lake picking off a few bass here and there.  I saw that the bass were schooling up on shad coming out of a drain pipe so I decided to throw on my shallow BPS Egg Crankbait in Texas Shad...and it was game on from there!  Bass were slamming the crankbait every 5-10 casts.  I would feel the subtle side to side wobble of the crankbait moving through the water followed by a good THUMP and the crankbait would stop dead.  At that moment I would throw all my weight into a right side sweep of the rod and FISH ON!  This continued until 2:30 in the afternoon when my fish count came to about 35 bass for the day so far.  My dad on the other hand had close to 50!  By that time I saw another DA member, Darkstar72, making his way along the pond catching a few fish here and there and snapping pictures for his buddy he was with.  I yelled to him across the lake jokingly that this lake only allows 1 DA member at a time.  He laughed and yelled back to me ask me how the fishing has been.  We finished up the short conversation and headed our separate ways along with my Dad heading home since my Mom had dinner ready to go.

I left that lake by myself and headed back to the spot we started at this morning...making sure that I parked in the correct spot this time! lol.  Gatorshaun had been in touch with me most of the day after this morning's incident so he headed over to meet me along with his girlfriend SunnyPhish.  I had a few more fish on the board before they showed up...but when they came the Super Fluke run was over!  Senkos became the diet of choice for these bass.  The whole day turned out to be unbelievable as far as fishing went...by the time I finished up I had 40 bass and 1 crappie landed.  If I wouldn't have missed the other fish that I missed the bite on or lost on the hookset I probably would have had close to 60 bass.  Deadsticking the Super Fluke and slow rolling a crankbait became the producers for the day.  Luckily I still had Sunday to refine my patterns to see if they produced even more fish!

The second day I had alot less time to make my mark on the lake...the numbers ended up being about half of yesterday's take, but man the quality today was there!  MWolf, another DA member, planned on meeting me out at the lake around 4:30 pm and before he arrived I already had 1 bass landed and 1 lost.  I saw him parking his car and I waited before I made my next cast.  I threw the Zoom Super Fluke out as far as it could go.  Let it sit, and gave it three twitches before it stopped dead.  I set the hook and the bass was off to the races!  The head of the fish never broke the surface until I could see MWolf walking down the sidewalk.  I yelled at him to hurry and that this fish was much bigger than any of the ones that I had on yesterday.  A couple head shakes later of the beast and I finally lipped it.  She taped at 18.5" and weighed in at 3 lbs 10 oz. 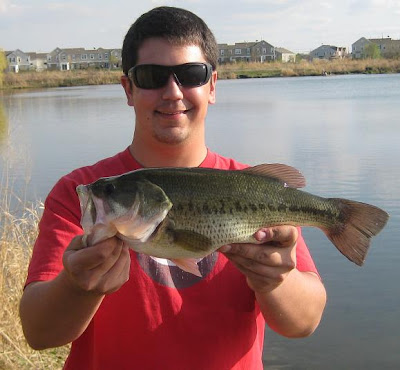 We worked our way down the shoreline picking up one or two as other fisherman in the area were nailing smaller bass on senkos.  I put on a senko just to see if that changed things up a bit, but I lost interest and was more concerned about hitting my favorite spot on the lake before sundown.  Unfortunately there was a smaller family fishing off the point so I waited patiently until they moved off.  Knowing that we would have company fighting for the spot I told MWolf to book it as soon as we saw the family leaving.  We got settled at our final spot at around 7-7:30ish and we had no idea what we were about to get ourselves into.  Since the fluke wasn't working anymore and the wind was picking up I switched up to a crankbait and the feeding frenzy commenced!  One bass after another with the biggest one pushing the 17-18" range. 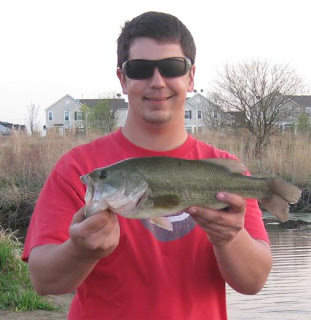 It wasn't until the 6th or 7th bass until I felt a lighter bite on the line...reeled it in, and come to find out it was a 9" crappie that inhaled the crankbait!  MWolf then hooked into one of his own after also switching to a crankbait with this one being in the 11" range.  Unfortunately it was gut hooked and bleeding badly so we decided to keep the crappie instead of letting it die in the water.  I am usually opposed to keeping fish, but that was too nice of a crappie not to eat.  Once the sun started setting the crappie madness kicked into high gear!  Another 9 incher then a 10 incher...with MWolf and I switching off catching fish.  Next thing I know my crankbait gets slammed by something alot bigger.  I thought it was a bass but to my surprise it was a 14" slab of a crappie! 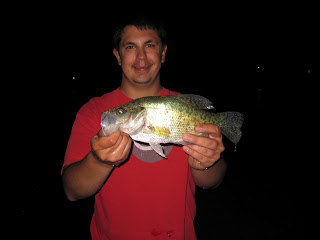 That had to be one of the biggest crappie I had seen in a long time and was amazed to find it in a Dupage County forest preserve lake.  By the time it was all said and done we walked away with 7 keeper crappie that weighed about 5 lbs in total with my 14" weighing in at a pound and a quarter.  MWolf took the 7 home to his family since his Dad had been waiting for a good amount of crappie to cook for dinner.  All I wanted was a couple pictures of my beast in return before it ended up in a frying pan.  After back and forth promises of "this is my last cast for the night" going on for about 30 minutes we finally wrapped it up.  It was interesting trying to get back to the cars with all of our gear and trying to hold 7 crappies by hand between the two of us...but some how we made it. 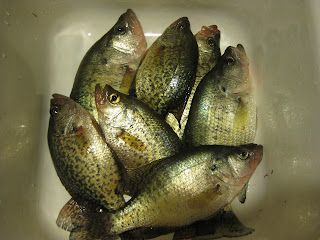 It was one of the best two days on the water I have had in awhile and the final total ended up at 54 bass and 6 crappie.  I know I won't have numbers like that very often...so I soaked it all in as much as I could!  Good fishing with good friends and family...doesn't get much better than that!

Thanks for reading...and tight lines!

Fluke
Posted by Fluke at 9:19 AM
Email ThisBlogThis!Share to TwitterShare to FacebookShare to Pinterest